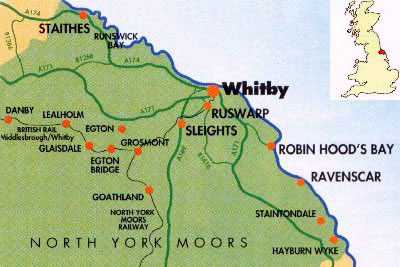 A small village high on the sunny side of the lower Esk Valley. Its moor top quarries were extensive and provided the stone to build Whitby Abbey, Whitby piers, London Bridge (now in Arizona) and the breakwater at the port of Tangiers. All that stone, 27,000 tons by 1847, was carried to Whitby on large carts pulled by oxen and the last section down the narrow Waterstead Lane to the Stone Quay was particularly fast and dangerous! The quarry has recently been reopened on a small scale for very local house extensions, etc so that the new walls will match the old, as no other sandstone from outside the National Park would be an exact match in colour, size or durability. The church of St Margaret's overlooks the Esk Valley and the graveyard contains the grave of Frank Meadow Sutcliffe, the Victorian pioneer of photography, who lived at Briggswath and who made such an outstanding pictorial record of Whitby in the early 20th century.

One of our larger villages, Castleton has several shops and serves much of the upper Esk Valley. Lying on one of the few roads running North - South across the North York Moors (from Guisborough to Hutton-le-Hole) this was always an important village, although no sign of the original castle now remains on the traditional motte (hill). Abandoned quarries lie just above the railway station, with road stone below and further up on the moor Gannister (silica-rich sandstone) which was used in glass and especially steel making at nearby Teesside. Cross the road bridge over the River Esk for Castleton railway station on the Esk Valley Line, with diesel trains between Whitby and Middlesbrough.

Danby gets its name from Dane-by, the village where the Danish Vikings eventually settled. A popular village in the upper Esk Valley, with a pub, bakery and shop. Within the village is Danby railway station on the Esk Valley Line, with diesel trains between Whitby and Middlesbrough. Just a mile east lies the North York Moors National Park Moors Centre, with lots to see and do for all the family, including free exhibitions, a gallery for local arts and crafts, bookshop, information desk, café, etc. Lots of local walk leaflets are available from the Centre, as well as local guided walks and activities. Cross the medieval Duck Bridge to reach the ruins of Danby Castle, where Catherine Parr, wife of Henry VIII, once lived. Now a farm house, the ancient manorial Court Leet still meets there every year for their traditional Mell Supper. Two miles outside the village lies the summit of Danby Beacon, one of the highest points north of the River Esk. It can be reached on foot or by road and from here there are panoramic views in all directions and a section of the ancient stage coach road from Whitby across the moor tops to Stokesley. This perilous journey used to cost 16 shillings (77½ pence) for an inside seat, or just half price if you sat on the roof!

Sometimes known as Egton Top to distinguish it from the village of Egton Bridge 1 mile further down the 1 in 3 (33% gradient) hill. Egton was and still is an important place in the farming calendar. In late August every year for the last 100+ years, Egton Agricultural Show attracts thousands of residents and visitors to see the finest farm animals, produce and equipment in competition and on display.

A mile below Egton proper, down a very steep road with an ancient, stone flagged pack horse road alongside, lies another, more tranquil world. This was one of the most important bridges in the Esk Valley, with several roads converging from all directions. The stone road bridge looks old but the date shows that it was actually built in 199? by one of the last remaining stone masons still employed by North Yorkshire County Council. It replaced the 'temporary' metal Bailey bridge which was used for over 60 years after the original bridge was washed away in the big flood of 1930. Father Postgate was born here, a local priest eventually betrayed and martyred in York in 1679, aged 82. The annual Egton Bridge Gooseberry Show is held here on the first Tuesday of August, since 1800. The world's heaviest Gooseberry was grown locally and measured here, as is well documented in the Guinness Book of Records.

An attractive moorland village with sheep grazing the wide grass verges, where once there was a 9-hole golf course back and forth across the road. Now better known as Aidensfield in the popular TV series Heartbeat, Goathland lies on the North Yorkshire Moors Steam Railway line from Whitby to Pickering. Harry Potter enthusiasts will recognise parts of Hogwarts station at Goathland Station - though the platform scenes were filmed at Grosmont Station.

Grosmont lies at the the junction of the Esk Valley Line with its regular, scheduled diesel trains between Whitby and Middlesbrough, and the North Yorkshire Moors Steam Railway from Whitby to Pickering. Steam enthusiasts can visit the Engine Sheds where heritage railway volunteers restore and maintain the steam trains. There are cafes, an arts and crafts gallery, and some very pleasing walks through the woods alongside the river for less mechanically-minded visitors. Walk quietly by the river, or stand on the road bridge, and you may be lucky enough to see a black and white Dipper flying past or even walking in the shallows.

Glaisdale is known as 'the Queen of the Dales' thanks to its fertile farmland. It is both a sizeable village and a dale, running into the broader valley of the Esk. The terraces of stone-built cottages along the steep main street originally housed the miners who worked in the short-lived ironstone mining industry here. Now a quiet rural village, it is hard to imagine such an industrial past. The iron smelting furnace is long gone, but stood near the railway station, in the valley below the village. Also at the bottom of the village, the much photographed Beggar's Bridge over the River Esk is an ancient pack horse bridge. Legend says it was built in 1619 by Tom Ferris. When he was but a poor local lad, he had to wade or swim the river to court his love, the daughter of a farmer who lived on the opposite bank. When leaving the village to seek his fame and fortune, the river was in full spate so he was unable to cross to bid her goodbye. He did make his fortune, eventually becoming Lord Mayor of Hull and Master of Trinity House, but never forgot his true love in Glaisdale and built the bridge in her memory.