Staithes - and its famous Apprentice Grocer 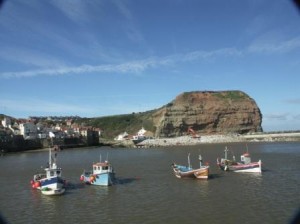 Close to the highest cliffs in England, the old village is tucked between between two bulky headlands (‘nabs’) which shelter the tiny harbour.  Home to many generations of fisherfolk, Staithes (pronounced locally as ‘Steers’) still has a small fleet of traditional cobles, often to be seen drawn up on the sides of Staithes Beck, where it flows into the harbour. Fishing and boat-building; smuggling and piracy; jet and iron-stone have all played a part in Staithes history.

You must pass through the unremarkable modern housing at the top of the bank and leave the car in the carpark, before walking down the steep cobbled lane to the harbour.  Take time to explore the haphazard alleyways of the old village, including the quaintly-named Dog Loup: the narrowest street in the North of England at a mere eighteen inches wide. You need to walk right through the village before finding the famous Cod & Lobster Inn on the quayside – so close to the waves that it has had to be rebuilt several times over the centuries.

Originally a Viking settlement, the high levels of seamanship needed to survive the hazardous local waters made ‘Steersmen’ a repeated target of the press-gangs.  Many pressed local men were killed in the Battle of Trafalgar.  Others emigrated unwillingly to the United States, after Commodore John Paul Jones, the father of the American Navy, carried out a daring replenishment raid here in 1779 after his famous victory over the English Navy in a sea-battle off Flamborough Head.

A still more famous mariner, the 16-year old James Cook, came here in 1744 as apprentice to William Sanderson, a local grocer and draper. Perhaps the young Cook found the busy harbour and tales of adventures at sea more exciting than shop-keeping, since by 1746 he was an apprentice seaman in Whitby.  The old Sanderson shop was washed away in the great storm of 1745, but parts of the building were re-used to build what is now known as James Cook’s Cottage.

The Staithes Heritage Centre and Captain Cook Museum, to be found in the old Methodist Chapel, has many exhibits about Cook’s life and voyages, together with interesting displays about the way of life in old Staithes, particularly that of the fisherfolk.  Of particular note are the traditional Staithes bonnets, which fisherwoman wore to protect their heads, neck and hair.  The bonnets were padded on the top since fish baskets were balanced on the head, while the flap down the back of the neck protected against run-off water.  Staithes woman were known for their graceful bearing, since they had to hold themselves very straight to balance the heavy baskets of fish on their heads while walking.

The coming of the railway in the late 1800s opened Staithes to holidaymakers. Its quaint cottages were a magnet for artists and the village became home to the famous Staithes group of impressionist painters in the early 1900s, with Dame Laura Knight perhaps the best known member.  A collection of the group’s work is on display in Pannett Art Gallery, Whitby.

More than most villages on the Heritage Coast, Staithes still retains much of the authentic sense of a traditional, tightly-knit fishing community.  It amply repays those visitors who take the time to get to know its stories, its people and its history.